Unlike the other participants, my trip to Doha was met by many administrative hurdles concerning my pre-entry registration approval certificate. I had to cancel my flight twice while waiting to be approved and then travelled by bus at night to Nairobi so I could manage to get Covid PCR test results in time for my departure to Doha, in addition to many other stresses. Despite those, I managed to travel to Doha on May 18, 2022, three days later than the rest of the group. I arrived in Doha late at night and it took me two hours to reach my final destination at the hotel. I had a short sleep of about two hours and then joined the group early in the morning for a visit to Murwab (an Abbasid period archaeological site) and Al Zubarah (an 18th-19th century site). I was elated to meet the entire “Indian Ocean Exchanges” group in person for the first time. The feelings were mutual as they were also all happy to see me finally joining them.

The walled coastal town of Al Zubarah in the Gulf flourished as a pearling and trading centre in the late 18th and early 19th centuries, before it was abandoned in the early 1900s. Al Zubarah sustained trading links across the Indian Ocean, Arabia and Western Asia. A layer of sand blown from the desert has protected the remains of the site’s palaces, mosques, streets, courtyard houses, and fishermen’s dwellings, in addition to its harbour and double defensive walls, a canal, and cemeteries. In Kenya, I used to hear stories that the Lamu archipelago exported mangroves poles to the Middle East starting in the 17th century until as recently as the mid 20th century, when the government of Kenya banned the export of mangroves poles to other countries. I used to hear stories from elderly community members that a lot of ships from the Middle East used to come to Lamu, bringing goods, such as dates, clothes, and other things. Some of these mangrove poles were used in the construction of Al Zubarah town and were especially visible in the roofing. Al Zubarah palace rooms look similar to rooms of houses in the coastal part of Kenya, because they all relied upon the same size of mangrove poles for roofing construction. It was exciting to see, on my first day in Qatar, evidence of connections between the East African Coast and Al Zubarah town, which could be extended across the architecture of the whole Gulf region.

Khalfan Bini Ahmed works for the National Museums of Kenya,as a research scientist in the archaeology department at Gedi National monument. He earned his MA in Archaeology and Museology from Sun-Yat Sen University.

THE OLD AND THE NEW – VANESSA CHEN

Upon arriving in Souq Waqif, a marketplace situated in Doha, I was struck by the emptiness of the streets. All the restaurants and stores were open and merchandise was placed outside on display, but there were few pedestrians walking about as it was the hottest time of the day. The Souq’s architecture of white washed buildings, mud rendered walls and exposed timber beams reflect a time when Doha was a village. This view contrasted the skyline, made up of futuristic buildings I saw while travelling from the airport.

A postcard that I found while strolling through one of the stores, nestled in an alley, depicted the market’s historic architecture that was not vastly different from the built environment that stood before me. Yet, the Souq, which I later discovered, had been abandoned due to the rise in shopping malls, and underwent a restoration and reconstruction program in the early 2000’s. This was to preserve the market’s traditional and historical identity, amidst rapid modernization. As most of the buildings in the Souq were accessible by foot and not by driving, the layout encouraged us to be more socially aware and engaged with those that shared the space. As we spent our days exploring libraries, archives, museums and archaeological sites, the city became more familiar and by the end of the trip, I could make my way around the labyrinthine market, using the faces of store-owners as reminders of where I was situated.

The most memorable part of the Doha study trip was meeting scholars from different corners of the world and being able to share our experiences and reflections after a long day of exploration. The dinner table, being the center, where most of this exchange happened, was a communal space where academic titles, qualifications and achievements were set aside. We all came together to fill our empty stomachs and through the connections and conversations that took place, broadened our understanding of the city, its relation to the Indian Ocean world, to ourselves, and to one another as not only scholars within the discipline but also collaborators in developing a wider understanding of the Indian Ocean world. Among the many lessons that the city taught me, it showed me how urban landscapes are physical manifestations of social, political and cultural practices. It has changed the way in which I interact with my own home city, Cape Town, South Africa, which has also been an integral site of the early history of Indian Ocean exchanges.

Vanessa Chen is a Ph.D. student at the University of Cape Town. Her research explores the documentary records of the early history of Chinese convicts, exiles and ‘free blacks’ at the Cape of Good Hope (1654 – 1838). Her research aims to convene and collate these slivers, which are scattered in multiple places, into a digital curation accessible online.

As soon as I stepped out of the airport in Doha, I was met by the thick humidity, a reminder of the many trips I have made to the Kenyan coast in the past. This was followed by a nostalgic sealike smell, and I instantly ached to feel the sand beneath my feet. The picturesque drive to the hotel in Souq Waqif continued to elicit a sense of familiarity. Every few metres I saw bougainvillaea bushes growing and spreading their colourful branches over walls or in what seemed to be public spaces. I identified several mosques and buildings whose architectural designs mirrored images from the Kenyan coast. It was breathtaking to see the amalgamation of historic architectural styles with more contemporary styles that exhibited nothing short of opulence. We got to the hotel and as soon as our driver offloaded our luggage, he bid us farewell ending the short pleasantries with the word “Inshallah”! I felt at home. 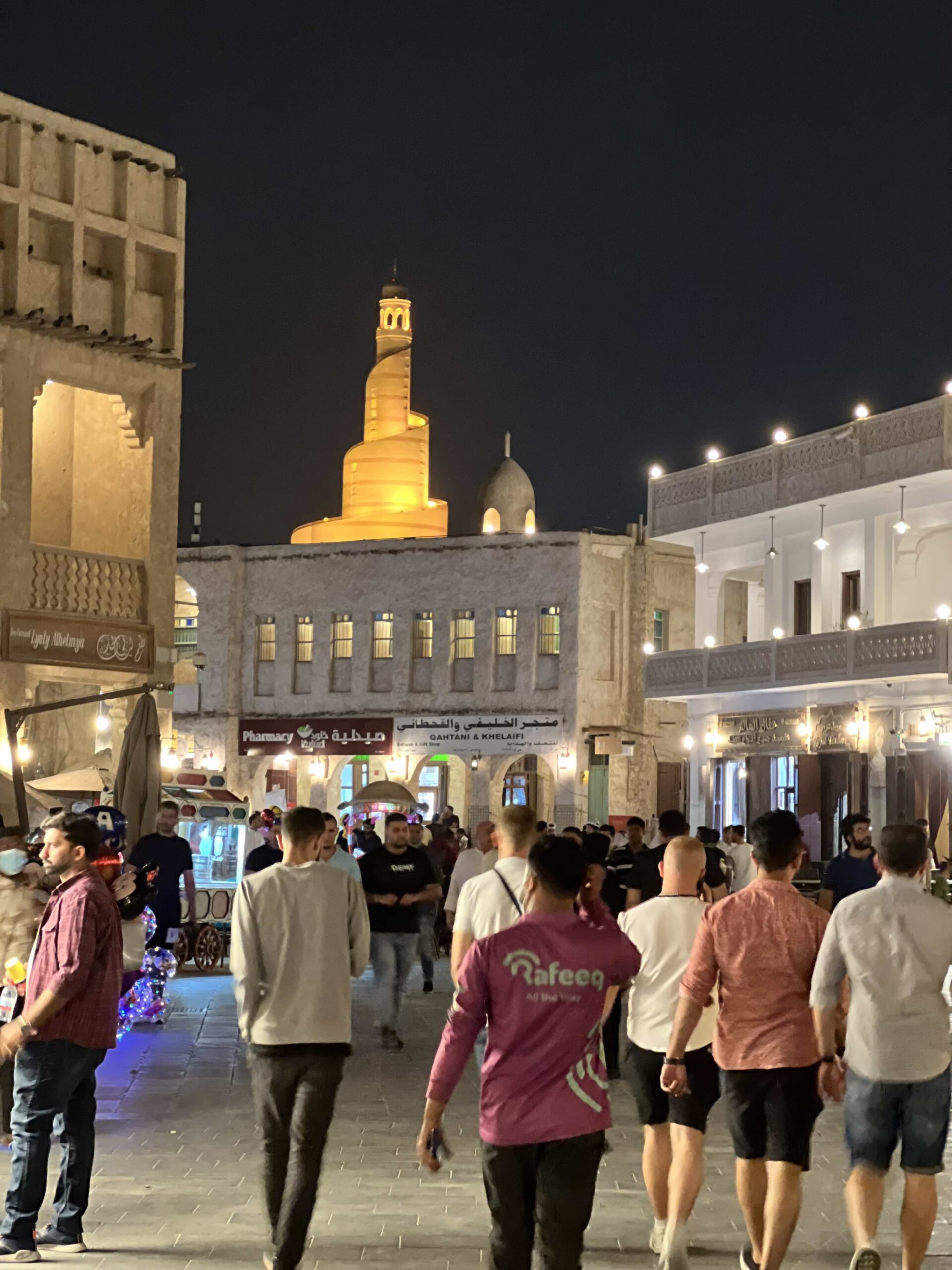 Doha boasts a myriad of restaurants that offer both local and foreign cuisines from around the globe. My favourite meals were from Indian restaurants or cooked using spices and herbs from the Middle East. A bowl of warm aromatic pishoririce accompanied by a rich fragrant chicken curry with chili, adding a fiery layer, was always welcomed. Buttered naan was the ideal vehicle to soak up all the goodness of the curry. A cold mango lassi was my preferred beverage to counteract the effects of the heat, creating a feeling of warmth and comfort. The Indian Ocean gastronomy was salient in most of the meals we enjoyed during our stay. Meals were quite similar to food cooked along the Kenyan coast combined with scents and flavours of the spice route, blended with culinary traditions borrowed from Asia, Africa and the Middle East.

During the day, the Souq Waqif streets were empty and abandoned with very little to no activity. This was due to the high temperatures experienced mid-year. However, in the evening the streets would be buzzing with excitement; locals and tourists would engage in shopping sprees or be seated outside respective restaurants enjoying a meal. Once again, these daily evening routines reminded me of the Kenyan coast, specifically Lamu Town, my main research site. The low temperatures, just before sunset, provided opportune moments for locals to run errands, meet up for a meal and catch up with friends and family. The smell of coffee and sweet-scented sheesha would waft through the arcades accompanied by cheerful chatter and laughter. The evening call to prayer would pierce through all the activities, echoing through the streets with the help of tiny speakers. The trip to Doha was a huge reminder of how connected the Indian Ocean world still is given the long millennia of trade, exchange, and cultural interaction. These cities and towns continue to reflect a world that was once economically, politically and socially connected through early global interrelations.

Simon Mwaniki is a PhD ethnomusicology student at the University of Minnesota. He earned his MA at the University of Cape Town. His research interests focus on traditional Swahili music performed in present-day Lamu Town and the survival of these performances over the years.